| Romantic hotel located in the heart of medieval Prague

Hotel is situated in the heart of Prague only a few minutes from the Wenceslas Square and Old Town Square. Most of major sights are in close distance,
many shops, music clubs, bars and restaurants can be found in hotel surrounding.

From all directions:
On Highway and Main roads towards CENTRUM, than towards ZIZKOV.
After this exit drive through the Husitska or Seifertova street, there are some one way streets around, it is advisable to have a road map ready.

The nearest stops from the hotel are Tram stations Husinecka and Lipanska (Nr. 5, 9, 26 during the day and 55, 58 after midnight). The Husinecka tram stop is only 1 stop from the Wilson's Station (Hlavni nadrazi) - the main train station of Prague.
The Wilson's Station is also a subway station situated on the red line C. 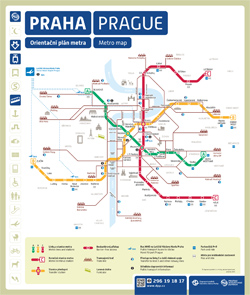 From Husinecka stop:
Walk up Seifertova street, turn left to Cimburkova street and then first right to Stitneho street, the hotel is second building on the left.

From Lipanska stop:
Walk down Seifertova street, at a large gothic church which you see on your left, turn right to Milicova street and then first left to Stitneho street.


By Train or Bus

From Main train station:
Take tram number 5, 9 or 26 and go one stop to Husinecka station or two stops to Lipanska station. Follow the instructions above on how to reach the hotel from the tram station, we recommend Lipanska station for the good point of orientation which is the large church...

From the Main Bus station Florenc:
Take Bus number 133 or 207 two stops to Tachovske namesti station. Get off the Bus, walk through Chlumova street and turn right into Stitneho street. Or take subway C (red line) from Florenc to Hlavni nadrazi station (the main train station in Prague, 1 stop) and follow the instructions above on how to reach the hotel from the Main Train Station.

We can arrange car transport from all stations, if you are interested.

Bikes may be transported on the Metro system (subway), on trains and ferries.
We hope that this cyclo map will provide you with all the necessary practical information and assist you in arranging of your bicycle trips and cycle tours around our capital city and the surrounding area.

By public city transport:
Take bus number 119 to the final stop called Dejvicka, here take metro line A (green line) to 4th stop called Mustek. Get off subway and take tram #9 to Husinecka (3rd stop) or Lipanska (4th stop). Get off tram, and follow the instuctions given above.

By public shuttle bus:
Take the regular shuttle bus from Ruzyne Airport to the centre of Prague (V Celnici street), walk 100m to Masarykovo nadrazi tram stop and take tram number 5 or 26 to the Husinecka or Lipanska stops. Get off tram, and follow the instuctions given above.

Alternatively, we can arrange car transport from airport which costs 650 CZK one way (1 to 4 persons) or 960 CZK one way (5 to 8 persons). Ruzyne is situated approx 14 km (8,75 miles) west from Prague city center, which means about 30 mins drive.

Accommodation in Prague - Located in the heart of Prague